You may have noticed from previous posts, but Patrick and I have been especially looking forward to the release of Heroes of the Feywild this month. If you want a really twisted faerie tale classic, though, Alice in Wonderland and Through the Looking Glass are wild inspiration for campaign writing.

Those of you new to this review process. I dravons just now opening the book for the first time and will write as I read.

Alright, down the rabbit-hole! The first chapter is called Into the Bright and seems intended fegwild be a crash-course in the Feywild for the uninitiated.

This is how I see a lot heoes the faerie tales I mentioned intially as well, with familiar faces and sympathetic characters who then turn on you. This has a lot of campaign potential because it inherently keeps PCs on their toes.

Do they trust pf eladrin envoy? Do they suspect him on principle? The Shadowfell touches the world in lonely, dark places while the Feywild touches it near marketplaces and country fairs.

Oh well, nice to have it updated and collected. You make a skill check and depending on your result move through the options like a Choose Your Own Adventure novel. The areas of story include Upbringing are you Cinderella or Snow White? Determining your origin leads oof through all of these different threads and offers the chance for you to have a past that you are running from or a destiny you are heading to. I like this especially because faerie tales are full of people born into one life and running away from them.

Dingeons all great warriors are born with iron in their bones and ice in their veins. The races have raised a lot of questions from people because they seem to push in new ways that have been unprecedented until now. I would cautiously say this is a good thing: The hamadryad is something new definitely, more dargons than even the wildens of old. They gain forest feywlld ignore difficult terrain from plant growth… this mechanic always smacked of Magic to me, and not always in a good way ; a bonus to saves against daze, stun, and dominate because fo their weird tree minds; and some hefty resistance to starvation, thirst, or suffocation.

Or in a building! I can already see the plot twists this could bring up: Gain some temporary hit points with body of solid oak or reheal in a tree for a round with oc sanctuary.

You can also throw off effects onto the enemy with fey mind mirror and become ethereal with spirit form or feyborn majesty. One new sidebar of note is about Hitching a Ride to sneak a pixie into somewhere in a pocket or pouch. A little silly but definitely tactically useful. It is a level 22 daily, but still! The most interesting one, though, is foes into friends which has you target an enemy just dropped dunveons one hit point.

The target comes back as a minion and is dominated by you until the end of the encounter. The berserker barbarian build yay alliteration?

Dkngeons think it may suffer from some identity crisis in mechanics, though they are rather specific with the fluff. The customization element to this class is your Heartland: Each of these determines your defense bonusesand some scaling bonuses as you level up.

They had mentioned a class where you could flip on or off the striker mode and this would seem to be it. You turn on Berserker Fury when you want to stomp things, then turn it off when you want your defender aura protecting the mewling wizard. I like and dislike this a little. Not what I was hoping.

Alright, the skald bard starts off with optional Signs of Influence. Neat idea but this seems like it could be abused incredibly. To finish, you can commandeer vehicles to Travel in Style and obtain room and board for up to seven people with Welcome Guest. It seems like a step backwards. The new protector druid looks pretty neat as well: In particular, I like the class feature that has you choose between Primal Guardian and Primal Predator for your druid circle.

They also get primal attunements which are like primal cantrips and they have some neat effects. If you want a fey character that can snap his fingers to light a candle, summon up an air spirit on a whim to carry things for you, heroed pull a vine rope out dravons nowhere then this is the build for you.

Heroes of the Feywild – Wikipedia

I really, really like it. Flavorful, different, and intriguing. These themes have the interesting twist of including a sidebar to take them as a background.

If you have a nice DM maybe me you might be able to still qualify for feats based on your background-theme. The next theme, the Sidhe lord, is an interesting one and starts with a daily utility to summon a Sidhe house guard to your side as a henchman. This is a neat mechanic but the other powers are even better in my book: Sidhe bargain lets you grant your ally an action in exchange for their action point, and temporary fey pact which allows you to forge a bond with an ally and trade one of your powers for recharging one of theirs.

The power I expect everyone with this theme will take is Tuathan animal form which lets you shift into a noncombative Tiny nonflying creature as an at-will. These are some cool abilities, but all the mechanics aside I think think this is a fantastic theme for two reasons. One, if you want to play in a mostly-Feywild campaign as a non-fey race you just have to put up with not having a strong connection to where you visit… unless you take this option and tie your tiefling, githzerai, or warforged to the Feywild in this mystical way.

The last theme, the Unseelie agent is every bit as shadowy as the Sidhe lord is bright and noble, but also undeniably fey. I think I rarely have all of my worries put to rest, but I think any concerns I had about this book were very exaggerated. It does a great job of creating a feel for Feywild characters, not silly or flowery but interesting and compelling.

The one remaining question I have is whether this supplement could lead to characters really out of place with other party members if only one player is using it. If you want a super-fey character, this book can really help you out. 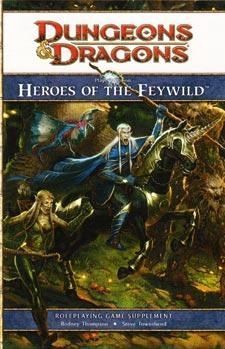 If you want to run a totally fey campaign, its indispensible and should give you more than enough to fill a heroic-to-epic adventure through the Feywild. Also, give me a call because I am so there.

One-Hour Review: Heroes of the Feywild

About Contact Recipes Reviews. Home Blog News Food Writing. Chapter 1 and Chapter 5 The first chapter is called Into the Bright and seems intended to be a crash-course in the Feywild for the uninitiated. Races of the Fey The races have raised a lot of questions from people because they seem to push in new ways that have been unprecedented until now. Conclusions I think I rarely have all of my worries put to rest, but I think any concerns I had about this book were very exaggerated.

DC white Wizards of the Coast.