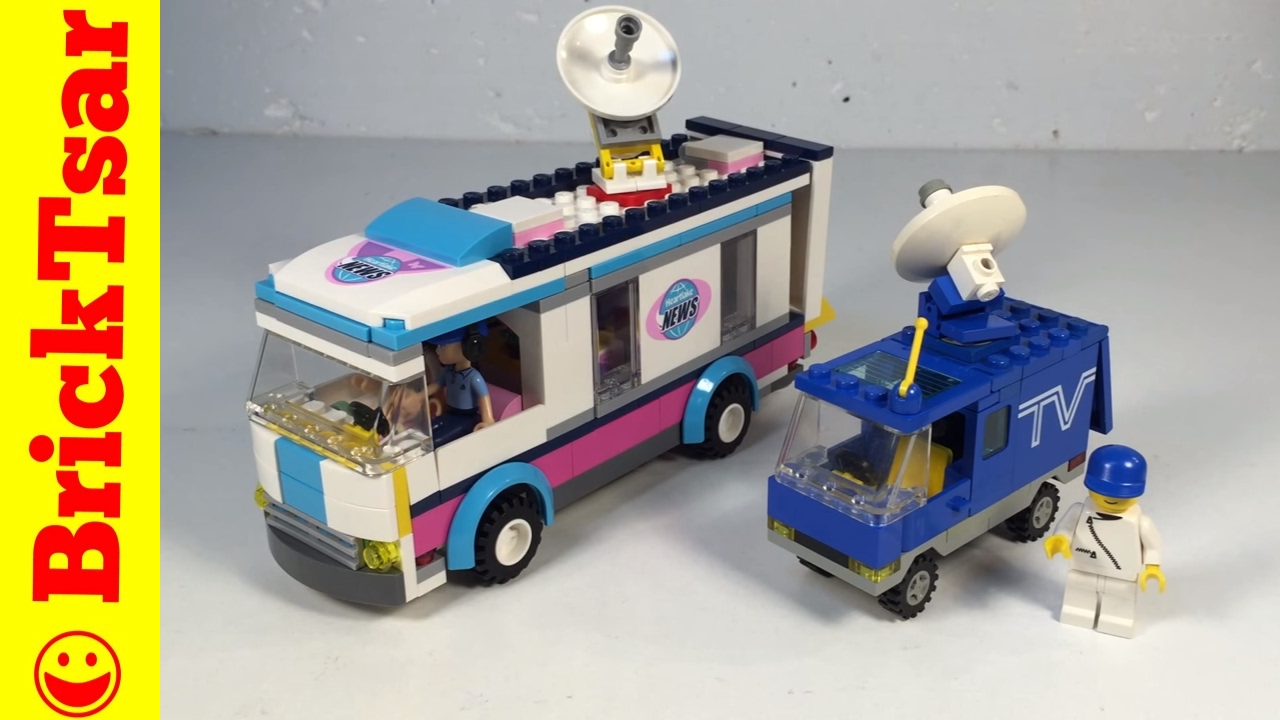 Every day, a hundred things happen in Lego City. Now, all inhabitants can be informed of the latest events, whether it’s a daring police chase, the opening of a new store, or the local soccer match. All thanks to the Mobile TV Studio! In this review, we’ll be looking at the little blue truck that provides all of Lego City with news. 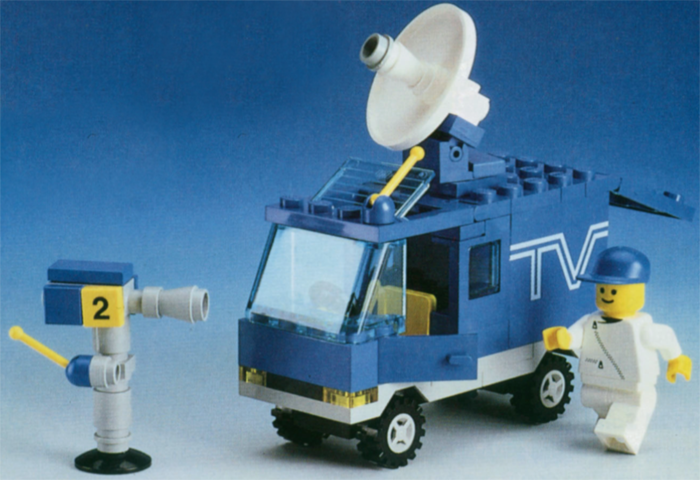 It’s a set that’s 20 years old already and one of the first 10 sets I ever got. Time for another trip down memory lane The box, courtesy of Peeron. A note on the price: None of the links below have a price listing, but luckily the Dutch catalogue still featured prices. Peeron has a scan of it listing the original price. The sports field in the background instantly gives you an idea for where to place this, although our cameraman could easily work all over town. Lwgo to Peeron, there’s 71 pieces.

According to Brickset, leog Since 66661 actually has an inventory list, I’ll assume they have the right number. I hope you’ll forgive me for not having counted everything myself, but if you’re up to the challenge, here’s a picture of the whole shebang:.

Not surprisingly, blue dominates, but there’s some grey for the chassis and camera as well. Apart from the minifig torso, there’s 4 printed parts.

The big TV panels are pretty neat. The inverted computer screen is cool as well. I have several with this screen on a regular slope, but this is the only one I own that’s inverted. Rather than having the more regular 2×4 mudguards, this car has 2 4×5 car lefo.

It also has two nifty blue doors. The instructions came folded in a teeny tiny shape, judging by the folds in the paper. Unfolded, it’s a single 661 sheet. This is then put in a large folder with all my other instructions. I’ve taken it out for this review. I’ve also taken the paper out of the plastic for the first time in many years, just for you guys to get a better shot. All dressed in white with a blue cap, this guy doesn’t get any sort of identifying TV outfit.

It’s just the zipper print we’ve seen so many times, mostly on racers. I don’t quite understand why a cameraman is wearing this.

Sure, it’s better than just some striped sweater or a blank body, but would it really have hurt to give him a neat little TV jacket or something? This small set will take you around 10 minutes to build. It’s a decent size car with few complex parts. We start off with the camera. There’s also a little lever for operating. A very nice little model.

The car has no solid base, but its chassis is made up of a simple 2×8 plate and the two car bases. As you build, you can see this is a pretty sweet truck. The driver even gets an actual seat; something not very common at the time if I’m not mistaken. He also has the luxury of two working doors. The two small windows behind him serve to make the space look bigger, even though they’re technically part of the van’s rear storage space.

For live broadcasts, the van also has a nifty sattellite dish and a color-coordinated antenna. After 12 steps, your van is finished. The van is simple looking enough, but it also has a few nice touches like the satellite dish and the monitor in the back of the van.

It’s a perfect little design for the 4-wide classic era. It will fit into any town and fit especially well into a classic town from the era. My only quibble is that there’s no accompanying set at all, but that’s a teeny tiny minor thing that doesn’t hurt the set itself at all. It’s not a raving, you-must-get-this-now sort of conclusion to a review, but then this isn’t so much a town essential as it is a nice little detail to drop into your town somewhere.

Decent on its own, fun to integrate in a larger city. It’s not sleek or anything, but then again – it’s a truck. The camera looks pretty neat. Special for its time? Don’t really think so.

But very nice if you’re just getting it now. Then again, you’ll probably be more preoccupied with making the events happening than filming them. On its own, it has its charms as oego. It’s quite nice that this car doesn’t just have the sole function of driving around. If you don’t have a big city yet, you could always pester your relatives by having your Lego man do in-depth reports on them. Judging by the other prices, leo about what you’d expect.

For that, I bump up the final score half a point. I love this set. I love almost all the Classic Town sets actually, but I guess it’s due to nostagia.

My brother must’ve had that set I really like this little set. There weren’t too many TV-themed sets, but they were all lrgo. While the next one was more complete with the news helicopter, it in no way detracts from this set.

Man, I wish Lego would start making more sets like this. There could be a TV Van, a studio, and lots more! You need to be a member in order to leave a comment.

Share this post Link to post Share on other sites. Posted September 8, I counted 77 or 78 pieces in your picture I love this set. I love almost all the Classic Town sets actually, but I guess it’s due to nostagia ; thanks for your detailed review.

Time for a new vehicle in Lego City, methinks – a brand new TV van based on this one Edited September 8, by Matt Dawson. I can’t rate it perfect because of the minifig and llego “flat front”, so I voted “above average”. Posted September 9, Nice to see a review of this set. I remember it was one i wanted but never got many years ago. Posted October 8, A nice little set that could be brought back and maybe even add a studio set.